The Telamon shipwreck off Lanzarote

The Telamon sank on 31st of October 1981 off the coast of Lanzarote, about a mile northeast of the port of Arrecife. On it's last trip it had a charge of tropical tree trunks on board carrying them from the Ivory Coast to Thessaloniki when it came in distress off the Canary Islands.

The tropical storm Joseph was formed on October 29th over the northern Atlantic Ocean, heading north-north-east before settling down over the Azores Islands on November 2nd. As maximum wind speeds were measured up to 90 km/h. Even if it was just a small cyclone, it was the one who was able to advance furthest towards the Canary Islands in 1981.

The Telamon ship struck leak and could not be refloated on the open sea. By order of the Harbor Master of Arrecife it was towed off by a tuna vessel to it's todays position, because they didn't like to know the port of Arrecife blocked by a sinking ship. There it sank to ground, still marking the same spot 35 years later as a non-predestined memorial of shipwreck. A few times turned around from further storms and broken into two parts, but with professionally emptied oil tanks.

The tropical woods were also discharged and simply piled up on land. Exposed to storm and rain, wind and sun for many years they where "rediscovered" by José María Pérez Sánchez in 2009. As a city planner he made from some of them a more or less successful sculpture at the Playa de las Cucharas beach in Costa Teguise.

The Telamon went under Greek flag with home port in Dundee on the Scottish coast, where she ran by stack as Temple Hall in 1953. The nowadays visible wreck is just the rear part of the vessel, clearly showing it's rudder blade out of the water. Originally it had a total length of 140 meters, in a storm broken into two parts.

Meanwhile the wreck enjoys of a great popularity, especially among divers as it is just a few meters from the shore. However, there are considerations to dismantle the wreck and to dispose it of. Dirk: "I was immersing several times at the Talamon during the past few years - must go looking in my videos if I also was filming there. I was always told that this should be the last opportunity before the wreck will be scrapped... but I still don't believe it. I'll see if I can find photos." If he finds some, I'll post them... :-) 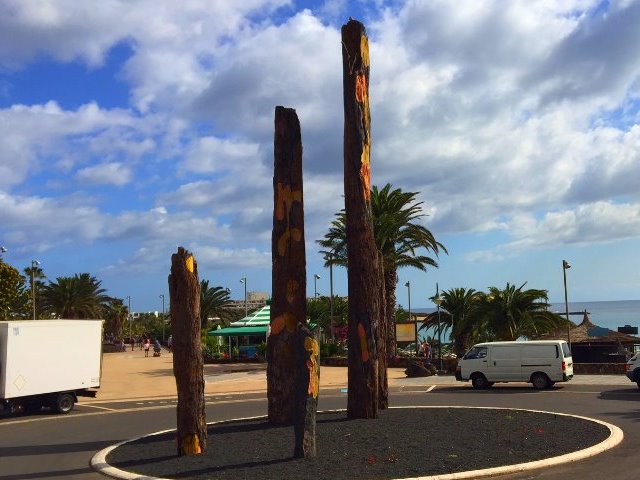 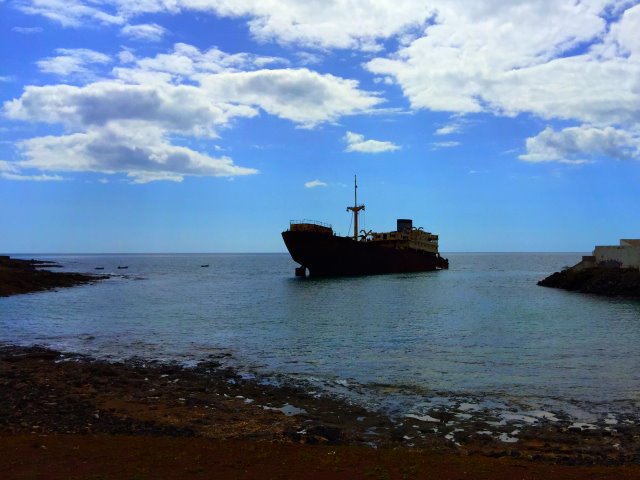 Happy New Year 2022
Mask again mandatory in Spain from Christmas Eve
Christmas 2021
Church architecture on Lanzarote
Reserve your hired car as soon as possible
Eruption of the Cumbre Vieja volcano on La Palma
Finally without mask
Do you fancy an excursion with a large sailing catamaran?